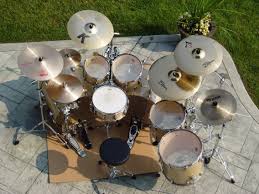 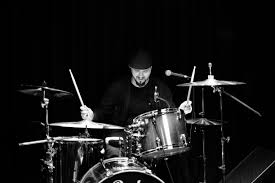 Okay, I’ll try to keep this as simple as possible (believe me, that’s not easy). Normally, “Duh!” is what you might say when someone makes a stupid comment or points out the incredibly obvious. But in drumming, “duh” beats are anything but stupid; they’re part of the amazing complexity of rhythm (see my other blog on that subject), and “duh vs. uh” is a way to differentiate between some of the finer parts of that complexity.

First of all, it might help to know that in 4/4 time (the most common type of rhythmic format), when you count by 16th notes, the basic pattern is 1e+a 2e+a 3e+a 4e+a. Back in the dark ages when I was first learning to play drums, this was counted as “One-ee-and-uh, two-ee-and-uh,” etc. At some point later on, this changed (which is what this blog is all about), but for now, let’s continue to think of it that way.

In the underlined example above, each of the four basic quarter-note counts (the 1, 2, 3 and 4) is subdivided into four shorter counts.” If you double your speed within the same tempo, so that you are counting by eighth notes (relatively speaking, twice as fast as quarter notes), you’re counting the numbers and the +’s (again, it’s an “and,” not a “plus”). When you go to sixteenth notes, you’re doubling the relative speed again by adding counts in between the “number” and “+” beats. These are the “e’s” and “a’s” you see in the underlined rhythm count above. If you counted the whole thing out as sixteen numbered beats, the “e” beats would be numbers 2, 6, 10 and 14, and what we’re calling the “uh” beats for now would be numbers 4, 8, 12, and 16. But these days, for reasons I’ll explain in a minute, the sixteenth-note “a’s” are counted not as “uh” but as “duh.” For this reason, some sixteenth-note drum notation counts are written as “1e+d2e+d,” etc., with the “a’s” replaced by “d’s,” with the “d” pronounced “duh.”

So: A “duh” beat is the fourth note in groups of four sixteenth notes, written as “a.” Again, the whole thing is thought of as “One-ee-and-uh,” etc. However, the “+a” is pronounced “an-duh” rather than “and-uh.” That’s because an “uh” note is different than a “duh” note—which, again, is what this blog is all about in the first place. An “uh” note can be one of two things (but not both at the same time, fortunately).

The first kind of “uh” beat is the third beat of a triplet in a shuffle rhythm (1-a 2-a 3-a 4-a—the same rhythm you hear your feet make when skipping down the sidewalk. It’s the rhythm you hear when you say, “Jack and Jill went up the hill to fetch a pail of water.”  Well-known classic rock shuffle songs: Truckin’ (Grateful Dead); Revolution (Beatles); Black Friday (Steely Dan); Pride and Joy (Stevie Ray Vaughn); Higher Ground (Stevie Wonder). Examples of half-time shuffle (or Purdie shuffle, named for drumming great Bernard Purdie): Rosanna (Toto); Babylon Sisters (Steely Dan). Half-time or “Purdie” shuffle will need to be the subject of a different blog; let’s just say that it’s difficult to play, but totally awesome.

The second kind of “uh” beat is an “and” note placed in between the second and third beats of a triplet, which forms a triplet-within-a-triplet—a sixteenth-note triplet inside an eighth-note triplet, for example. In order to count both kinds of triplets, you count “1 trip-a-let 2 trip-a-let,” etc., but again, you say those trip-a-let a’s as “uh.” An example of that type of rhythm would be the ride cymbal beat and guitar rhythmic pattern on the Animals’ version of House of the Rising Sun, or ride cymbal on the Beatles’ song This Boy.

I told you it was complicated! But I have to say, shuffle rhythms are SO much fun! So is all the other stuff I’ve been talking about in this blog. Come do drum lessons with me to find out just how much fun drumming and rhythmic exploration can be!

I sit in silence for long periods of time, then make joyful noise on the drums! I guess that makes me an oxymoron. (Some would say just a moron. Oh well.) I’m a third-generation Colorado native and have lived in the state all my life. I graduated from the University of Colorado at Denver (BA, Writing, 1988). In addition to my contemplative perusings, I love to read—from the Bible and biblical/historical studies, to Shakespeare, to Mark Twain, to John Grisham. I love to explore rhythms on the drums—drum set or hand percussion, worship, rock, jazz, blues, folk, country, drum circle, rudiments, jam band, anything; for me, it’s the most in-the-moment thing there is. I love to hike Colorado's mountains—I feel so alive and at home among the trees, boulders, rivers, and wildflowers—another very in-the-moment thing. I love to soak in Colorado’s many hot springs—Pagosa is my favorite, but there are many good ones. I love to watch good movies—from Dead Poets Society to Lord of the Rings to The Princess Bride—and eat good food and drink good wine or dark beer with my wife, Diane.