Whether it’s a contemporary worship band, a recording of a choir and orchestra performing a Latin-mass hymn, or just a few unaccompanied voices singing a well-known praise song, contemplative prayer sessions can be enriched by a short musical introduction. I have seen this sometimes as a blessing, more often as just an ordinary, it-is-what-it-is kind of thing. 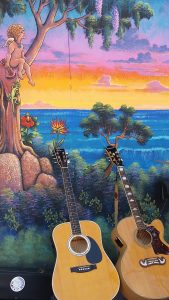 One recent morning at such a prayer group, I felt a little annoyance when the recording usually used to start our prayer time came on a bit loud. I asked God to tell the group’s leader to please turn down the volume on the recording. The way God responded to that prayer was beautiful. I heard his whispered encouragement asking me to listen as if I’d never heard the song before (although I had, many times), and to practice in-the-moment listening, as if with the heart of a child.

I felt the Spirit’s joy in the invitation. Laying aside my annoyance, I accepted the challenge. As the song continued playing, I experienced the music as a fresh breeze scented with rain, apple and honeysuckle blossoms, and many other scents, wafting into the room. That grace-laden zephyr was gradually accompanied by the songs of many birds, the rushing of a great river giving way to the deep drumming of a distant but immense waterfall, and the hushed amens and “yes, Lord” affirmations of many humble, worshipful voices.

I heard all this in the Spirit, and I doubt that anyone else in the room heard it that way. It was a special, beautifully gift-wrapped reminder to me of how God can turn the ordinary and mundane into the magical. The song led into a time of relaxing in the sweet Spirit’s rest, a time of being nourished by the presence of God like a baby at the breast. The peace of that lullaby echoed through the silence of centering prayer, the scripture meditation and quiet discussion that followed, and on into the rest of the day. I’m sure I’ll hear that lovely canticle in the future—it’s used often with this group—but never as just a common, everyday thing again. That’s one prayer I’m quite happy to say God did not answer!